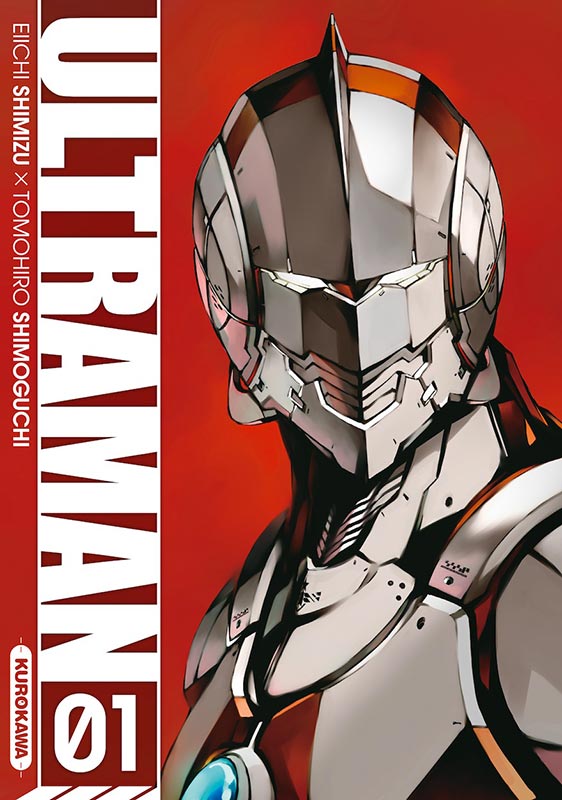 I fail Otaku 101, because the first time I heard about “Ultraman”–an insanely popular live-action hero in Japan, having so many spin-offs that it made the Guinness Book of World Records–was in Ready, Player One.

To be fair to me, I don’t watch a lot of live-action TV shows or movies that come out of Japan. I think I saw the 1954 ゴジラ, Gojira/Godzilla once, because I thought I should, as it’s a classic.

Even so, I still feel kind of weird that I had no idea who or what Ultraman was. It’s like being a fan of American things and never having heard of “Star Wars.”

My only excuse is that Ultraman does not seem to be a favorite of scanlators. There are ten Ultraman manga listed on Baka-Updates, very few of which have English translation. I found a zip file of Ultraman Tiga (2003) on a scanlation site.

My library had the first four volumes of the new manga by  Shimizu and Shimoguichi, and it only came out in 2011 (and is on-going,) so, while I am nearly a decade behind the times, I somehow don’t feel quite as bad.

Let me tell you about Ultraman.

I get the feeling while reading this manga that I’m probably missing capital-H History, but, despite that, the story is easy enough to follow.

As the back cover copy says, “A couple of decades have passed since Ultraman last was seen in Tokyo, and his kaiju nemeses seem to have gone back into outer space.”

Apparently, Ultraman was originally formed by the merging between a human, Hayata Shin, and an alien (wikipeida suggests that the race was simply called ‘Ultras.’) After Ultraman was no longer needed, Shin and the alien parted ways in some fashion, and now Shin has no memory of having been Ultraman, except the notion that he’d previously served in the SSSP, (basically a secret space patrol)…. and maybe there’s a clue in those pesky superpowers that he passed on to his son, Shinjiro.

You know, like, how Shinjiro can leap between buildings….

…in a single bound.

In a surprise to no reader anywhere, of course, what happens is that the alien bad guys return.

Shin attempts to return to his role as Ultraman, but he’s, like, sixty? I mean, I’m only a decade away from that, myself, but I also am not trying to punch through exoskeletons on the regular. Things don’t go well for Shin, so, Shinjiro must decide if he’s going to take on his father’s job.

What I kind of love about this manga? We still don’t know if Shinjiro is up for it by the end of volume 4.

And that does seem, at times, to be what’s required.

In fact, in an interesting turn of events, we discover that the SSSP has been developing an Ultraman suit that a regular human might use. They’ve been training this alternate Ultraman (called “Seven” because the suit prototype is 7.1 and there might be a Japanese pun going on here, too,) Moroboshi Dan.

Moroboshi has no problem with the whole murdering thing.

Is this a feature, Moroboshi, or… a bug?

This seems to be the first conflict that we’re setting up, this rivalry and the question: is it better to have superpowers and lack the will to kill or be positively gleefully murderous, but not have superpowers.

Kind of a classic Superman vs. Batman thing going on.

But, it works for me?

I asked the library to buy the rest of the volumes available in English (which, at the time of this review, would take us to volume 12.) I’m not sure that what is here is enough of a compelling story to zip through it on the pirate sites, but, if the library goes for it, I will certainly read the volumes as they come in.

The art is very pretty.

And there is some interesting world-building going on… I mean, probably most of it is being lifted from the MASSIVE history of the Ultraman franchise, but doesn’t make it any less fascinating.

For instance, there seems to be an entire alien sub-city in a tesseract portal inside the SSSP, where aliens are living their lives… as well as one human, who apparently opted out of our world in favor of theirs. I’m intrigued by this guy and his Wookie-like companion. (Actually his companion appears to made entirely of rocks, but this human is the only one who understands his gigantic companion, so, you know, it reminded me of the relationship between Han Solo and Chewbacca.)

I think if you’re generally a fan of fighting manga, you might find a lot to enjoy in this one.

And, of course, if you read it, you’ll know everything you need to know about Ultraman and you can pass any otaku quizzes thrown your way!