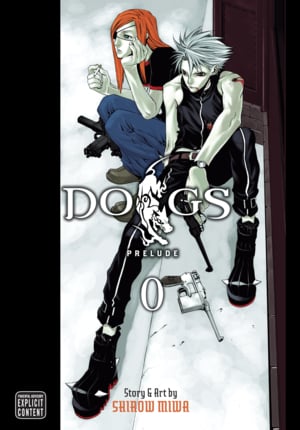 I’m running out of titles to read at my library.  In desperation, I picked up both Dogs: Prelude (aka Dogs: Stray Dogs Howling in the Night) and Dogs: Bullets & Carnage (volumes 1 and 2).

What was strange to me is that I ended up sort of enjoying Prelude, but then couldn’t get into the actual series at all.

I think what I liked about Prelude was that is was basically just a series of character sketches that was fairly heavy on character.  Viz Media’s site actually has a pretty decent description of the shorts, so I’ll quote it here, in full:

MIHAI, the “Weepy Old Killer”: A former hitman now trying to live a quiet life but haunted by the deaths of his victims and his lover.

NAOTO, the “Blade Maiden”: A preternaturally skilled swordswoman with a single desire: revenge against the assassin who cut down her family.

HEINE, the “Stray Dog”: A cipher with a metal collar bolted to his neck, a disturbing talent for mayhem, and a childhood sacrificed to the thing known as “Kerberos.”

Driven by their ghosts–both dead and alive–and their desire for truth, all are struggling to solve the secrets of the past while surviving the dangerous present–by gun and sword and courage and luck.

Individually, I liked them all.

In particular, I liked Badou the information broker who ends up accidentally getting a picture of a mob boss in the middle of an SMBD session (where the boss is definitely not the role you’d expect) and ends up having a Very Bad Day. I think that I liked that chapter/story because it was sprinkled with a lot of humor. Plus, who can’t relate to going LITERALLY ballistic when you can’t get your drug of choice.

Meanwhile, as for the others, I’m super curious about Heine’s past–he’s clearly been genetically engineered so that he can’t die unless shot in the head.  There’s a hint of someone who maybe once controlled him or experimented on him, that I would potentially have read more about…

I just couldn’t get into it.

Perhaps, had I liked the art style of the manga better, I’d have been able to get into the series. Alas, I ran off to YouTube and found the anime instead–which, if you’re interested, is an excellent adaptation of Prelude. (Also, one of my favorite voice actors plays the part of Mihai, who is also endearing as a character, particularly where he interacts with Badou.)

But… so, I don’t know if I can recommend this one or not?

I feel like this is the second manga that I’ve read lately where I’ve ended up saying, “Mmm, the anime is better??” which is not really why I started this blog.

I may have to go back to yaoi, if I keep striking out like this.

Not that that would be a hardship.